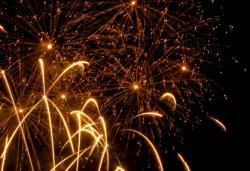 It looms large over the Scottish social calendar. As soon as Christmas dinner has been digested and the multi-leafed credit card bill has been forced through the letter box, the spectre of Hogmanay raises its boozy head.
Hogmanay is Scotlands new year celebration. Typically, its a less than abstemious affair. Drinking to ones health and happiness seems to be rather contrary, especially as the hangover of January 1st is usually a category nine, debilitating malaise. Its a an almighty knees-up with centuries of history behind it, and one that brings a number of logistical problems to revellers worrying where they should see the bells in. Party politics is never more fraught in the lead up to Hogmanay; everyones having a party, its a question of whose to got to. Often, the answer is all of them.
The origin of the word Hogmanay is subject of much head scratching and linguistic theorising. Some say it is derived from old Norse dialects, evolving from the Scandinavian word Hoggonott. This has some credence considering the idea of Hogmanay seems to align itself with the winter solstice, and its associated pagan festivals. Others say the word as old Saxon and Gaelic roots, whilst the French Homme est né, translated roughly as man is born, is accredited as being the source.
What is more certain are the curious rituals that mark the coming of the new year. Drink, of course, plays a central role in what is perhaps the most hedonistic day of the year. So much so that in the late 17th Century the Presbyterian Church voiced its disapproval at the nations wanton excess. But the central tenet of Hogmanay is wishing family, friends and perfect strangers a guid new year. And if that entails having the biggest part of the year then so be it.
First footing, popular throughout Scotland, and indeed England, is effectively the act of being the first person to visit a household. After the bells sound the new year, the first footer will arrive at the door bearing gifts  traditionally this would be black bun, salt, and whisky, but nowadays shortbread seems to be the preferred first foot gift. Such is the auld Scottish superstition, the preferred first footer (in terms of bringing luck, prosperity, that sort of thing) would be a tall, dark and handsome male. Not all are that fussy though, it matters less that the first footer may have fair hair, or perish the thought, female; just so long as they have a drink and dont look categorically unstable. The porous thresholds of Glasgow and Edinburghs tenement blocks can unearth some individuals that are rather the worse for wear towards the tail-end of Hogmanay celebrations.
Such has been the success of marketing Hogmanay as a commercial event, Edinburgh , Glasgow , Dundee , Stirling and Aberdeen all hold outdoor street parties, complete with bands and firework displays. Edinburghs shindig is undoubtedly the largest event, attracting up to 100,000 people to its all-ticket party. In recent years, however, the weather has put a stop to proceedings  such was the ferocity of the wind and rain, 2006s event was cancelled for fears for public safety. A tale familiar throughout the country. Though the hardy residents of Stonehaven in Scotlands north-east take a lot of dissuasion; their fireball procession still took place. Up to 12,000 people make their way up to the Kincardine fishing village each year to witness the precarious fireballs. Chicken wire packed with paper, tar, and all manner of flammable materials is set alight and twirled on the end of a two metre rope. The marchers make their way to the harbour before tossing the fireballs into the North Sea.
A tradition which has all but died out is that of saining the household. Saining evolved in the Highlands and involves burning branches of juniper until the house is fumigated  think of it as extreme pot pourri. A cleansing ritual that is repeated throughout the country, though perhaps some Jif and a mop of the floor would do for most  in the days of coal fires the hearth would be swept.
The last, and perhaps the most enduring ritual; and that is the singing of Robert Burns poem Auld Lang Syne. It is hard to imagine Hogmanay without Burns verse, almost as hard as trying to remember the evening itself. For the walking wounded, new years day is a day for steak pie and making resolutions that wont see the end of February.