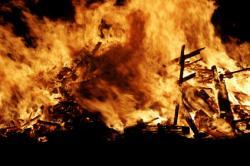 Bonfire Night Celebrated annually in Britain on November 5th, Bonfire Night dates back over 400 years to the infamous Gunpowder Plot of 1605. Guy Fawkes led a group of Catholic conspirators in an alleged plot to blow up the Houses of Parliament and assassinate King James I . The plot was foiled due to a tip off from one of the perpetrators to a friend, warning him not to attend Parliament that day, which aroused suspicions and led to the uncovering of the plot. The conspirators were convicted of treason and hung, drawn and quartered.

To this day in Britain and some other parts of the commonwealth, it is traditional to light a large fire called a bonfire in celebration of the safe deliverance of the King and the capture of the villains. This celebration was actually compulsory in Britain until 1859. One of the key features of the tradition is to create an effigy of Guy Fawkes which is known as 'the Guy. This is subsequently burned on the top of the bonfire. Prior to the evening itself, it is also traditional for youngsters to show their 'Guy' on the streets using it to tout for money. 'Penny for the Guy', as it is known, is traditionally to raise the money to buy fireworks. Today, the once imaginative art of making a Guy seems to have degenerated to the point where a joke shop Guy Fawkes mask affixed to a loose bundle of clothing is assumed sufficient to separate us from our spare change.

Over the centuries, fireworks have been introduced to the celebration and have now become an integral feature of the fifth of November. Larger displays have become more fashionable in recent decades; involving ever louder and more spectacular 'exhibition' fireworks that have power unlike anything legal for use at home. The homespun Bonfire Night celebration has not died away though, but in part due to fears over the safety of fireworks at home, it is far less common than it was some twenty to thirty years ago.

Along with the bonfire, the fireworks and the Guy other traditional ingredients of bonfire night include mulled wine. This is a hot drink made from red wine with added herbs. It's an ideal choice for the cold November evening in Britain. Still on a warming theme hot jacket potatoes and roast chestnuts are traditionally cooked on the bonfire and enjoyed by the fire after the fireworks are all used up.