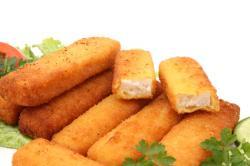 Clarence Birdseye, a naturalist working in the Arctic just after WWI , saw Inuit fishermen placing their catch to freeze on the ice then defrost it in perfect condition days later. An idea was born. The inquisitive Clarence experimented back in the USA, and built a plate freezer that quick-froze food. He secured patents and built up a business whose greatest success came some years later in the form of little sticks of fish coated in breadcrumbs.

Developed at the Birdseye factory in the South Quay area of Great Yarmouth , the Fish Finger was to become one of the great British teatime staples. Since the product was launched in 1955, at 1s & 8d a packet, 15 billion have been sold, and more than 100 packets are sold every minute in the UK.

Different fish were tried during the product development, with a herring-based version rejected in favour of the eventual cod Fish Finger. The less-than-snappy name battered cod pieces was passed over after consulting the views of the factory workforce, who preferred the fish finger appellation. It is nice to think some of them had Shakespearian connotations in mind when the battered cod pieces label was thrown out.

The product has multiple advantages. Its simple and healthy, just fish and breadcrumb coating. It can be cooked in various ways  grilled, fried, baked in the oven or zapped in the microwave. Its quick and easy to prepare  fish fingers and beans are a great bed-sit staple. And there are no inconvenient bones to worry parents serving them to their kids  though it is a mistake to think that children are the dominant consumers, as two out of three fish fingers are eaten by adults.

Birdseye has now moved towards using fish other than cod, which is increasingly scarce and expensive. Alaskan pollock is to be used instead of cod, a thoroughly laudable decision that is expected to reduce the cod catch by some two million fish a year, and means the product can be MSC (Marine Stewardship Council) certified. Hats off to Captain Birdseye then.