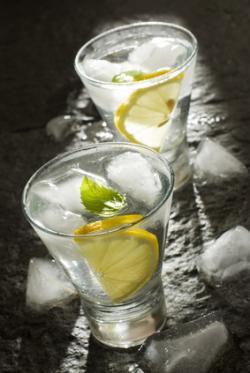 
The gin and tonic is a most magical elixir. Though it might fall short in being able to raise the dead it would certainly afford them a degree of comfort. Gins medicinal thrall dates back to the days of William Of Orange , when British citizens may well have needed a stiff libation to swallow the fact their king was a Dutchman. Back then, fresh off the boat from Holland where it was first distilled, gin was filed beside leeches as a medicine of some power. In the days of Dickens gin was oft used as an expectorant. Added to a glass of hot water and inhaled the vapours recalled the poorly to life  whatever was left over to drink was a suitable escape route from slum housing, smog and the general choleric miasma of newly industrialised Britain. Indeed, inhaling gin vapour in such a manner is highly recommended these days, try it to expel a hangover, cold or just for the fun of it. As convivial experiences go, its right up there. Gins clarity belies its complex flavour notes, all manner of tastes and scents which make it so hard to pin down. A white grain spirit, flavoured, scented and supernaturally transformed by juniper berries, citrus peel, anise, angelica root and a whole host of botanicals, gin is anything but ordinary. But, until 1858, it wasnt really sexy  not like it is today, when it is as kind on the eye as it its on the palate. A tall Collins glass, packed with ice and garnished with a fat wedge of lime: there are few better drinks for toasting the summer. Of course, when gin was fizzed and lifted by tonic for the very first time, Britain was basking in the perennial sunshine of her Empire. The sun never set on the British Empire so it was crucial it had something to cool it down. As the sun fell towards the horizon in India, the mosquitoes would sharpen their appetites and members of the East India Company had to be on their guard against malaria. So, not only washing away the thirst worked up on horseback as the rigours of the daily chukka took their toll, the gin and tonic was used as a measure against malaria. Tonic water  still known to this day as Indian tonic water  contained quinine, no friend of the mosquito, but a bosom buddy to gin. The volume of gin consumed in India may have fell in the last century, but back home in Blighty, by way of Holland and India and quaffed under the summer sun, the gin and tonic has never been more popular. Of course, remember to be generous with the gin, ice and lime, and give it just a splash of tonic for the fizz. Bottoms up.