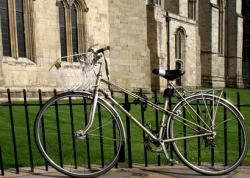 
It is perhaps strange that an abstract idea such as Oxbridge should be regarded as a national institution. Yet such is the power of the two ancient universities, Oxford and Cambridge, and the presence of their graduates as a majority in the higher ranks of civil service, the arts and politics in this country, that it would be hard not to regard it thus.
The concept of Oxbridge illustrates simultaneously the best and the worst of this country.
As seats of learning, honing many of the finest minds ever produced by Britain  completely at random say Maynard Keynes, Harold Wilson, Isaac Newton, Stephen Fry and Lord Byron  Oxford and Cambridge Universities are rightly a source of national pride. The beauty of many of their buildings adds to that lustre. And as research centres they have helped win numerous Nobel Prizes. The term can also encompass a certain tone; a clear accent; the intellectual polish of the widely read; an ability to argue cogently as demanded by the tutorial system of the universities.
But there are less laudable aspects to Oxbridge. The universities constantly claim to be attempting to extend their reach to students from the state sector, yet the chances of those from independent schools winning places remain far far better, making Oxbridge mortar in the class wall dividing our haves and have-nots. Similarly, Oxbridge constitutes one of the most significant old boy networks, working with the old school tie to help promote the careers of Oxbridge graduates, reducing the gene-pool to dangerous effect: introductions can be made; internships arranged; a word whispered in the right ear.
The power of Oxbridge has perhaps existed for eight centuries; strangely the term itself only dates from a Thackeray novel of 1849, and only entered common parlance in the 1950s.