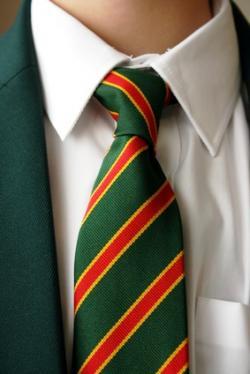 
Two things are denoted by the phrase the old school tie. The first is the obvious one: a tie which is worn by former pupils to demonstrate their allegiance to an alma mater. Thus, most famously, Old Etonians can wear a black tie with an Eton blue (a light blue) stripe. Ex-pupils of Stowe , Harrow , Rugby , and so forth have their own identifiers.
Its second meaning is more important in British society, an aspect of the class system that still casts a shadow over public life in this country. It is a short-hand (along with the interchangeable old boy network) for the use of contacts from school, university and even regimental times to assist those of a similar background; make introductions; put in a good word.
The system can work for good, where fund-raising for example benefits from tapping the wealthy for support for good causes. But it can and all too often does work in a way that is merely nepotism and/or cronyism, to the enormous disadvantage of those from less privileged backgrounds, of ethnic minorities, and generally of women. Scratch our political system and youll find evidence of the old school tie in operation, and not just in the Conservative Party, though the almost hereditary nature of some safe Tory seats over the years has been its most blatant exemplar; examine TV and you will soon see evidence of why our mediacracy is leading a descent into mediocrity, as restricting the range of viewpoints and backgrounds in a group is unhealthy.