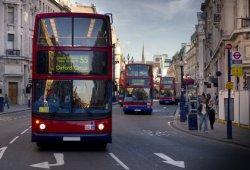 
Just the colour is enough to conjure up something of England: red post-boxes; red telephone boxes , red buses. But the red bus speaks more of the capital than the others. In a hundred American films a red double-decker is the visual shorthand to identify  London  England. Who of a certain age can forget Here Come the Double Deckers either  though Peter Firth who starred in it as a boy may wish to?
In our folk memory it is not just buses, but Routemaster buses, manufactured between 1958 and 1968 , indelibly associated in our minds eye with mini-skirts, The Beatles and Carnaby Street. The Routemaster with its slippy steel pole at the open exit at the back of the bus, which the brave and foolhardy would jump from coolly before the vehicle stopped  not advisable on icy mornings. There are still a couple of these iconic buses running on so-called heritage routes: one travelling from the Royal Albert Hall via Hyde Park Corner, Piccadilly Circus , Trafalgar Square , and the Strand to Aldwych ; the other from Trafalgar Square to Tower Hill , taking in Fleet Street, Cannon Street and The Monument.
And where would Londons souvenir stalls and shops be without the red bus?
But for Londoners the bus is not just symbolic, its part of everyday life; tube trains run faster, but getting to and from them takes time, and the view is definitely not as good down there as it is riding the streets of London, where knowledge of the routes is a literal rite of passage.