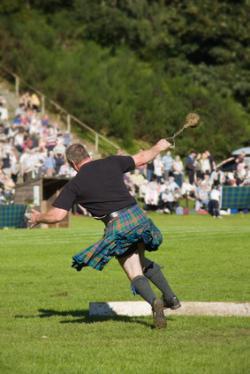 
The Greeks may have got there first with a blockbuster sporting event that became a by-word for sportsmanship and athletic excellence, but the Olympics has lost its lustre. Politics, big business, soaring costs and athletes on steroids are to blame. So where better than a traditional Scottish Highland Games to restore our faith in human endurance and athleticism?
The traditions of the games maybe unknown  some say they date back to the time of King Malcolm III (the chap that killed MacBeth) who sent his men out in a flat race to see whod be the quickest, others say they were a cover for Scottish insurgents to train during a time of English occupancy. But it doesnt really matter; for the Highland Games as we know them today are far removed from any Highlander military tattoo and are now a sort of post- Victorian display of Scottish-ness. They are now a place for pipe bands, for caber tossers and other heavyweight Scotsman to throw things about a field, going ruddy with effort for the edification of children going blue with the cold, or turning green from all the candy floss theyve eaten. Indeed, of all the sporting endeavours at the Highland Games , guzzling confectionary is probably the most keenly contested and widely participated. Tablet, toffee apples, the aforementioned candy floss; abandon all tooth enamel ye who enter here...
Held locally throughout Scotland, the largest Highland Games is held in Dunoon , where the Cowal Games welcomes up to 20,000 visitors to watch 3,500 performers each august. Perhaps the most iconic of activities at the games is the caber toss. In no other sector of polite society is throwing the trunk of a tree over the shoulder while wearing your clans tartan acceptable. It probably should be, but thats another matter. Other sports include: the stone put (much like the shot put); the sheaf throw (straw in a sack is lifted by pitchfork and thrown over a bar); the hammer throw (a favourite; no spinning, much gurning, then an untutored heave); and other variations on a theme. The theme, of course, being, throw something heavy as far or as high as you can. Simple and spartan  its the essence of sport.
Aside from barrel-thighed fellows hurling cabers and hammers through the air, there are some more rarefied activities. Sword dancing is another popular side show, as are the pipe bands and exhibitions of local artists. Factor in the various stalls selling arts, crafts, shortbread and tablet, and there is something for every demographic. The chieftain of the games is also a star turn of the event. Traditionally, this would have been a clan chief, but in the modern day it is more likely to be a celebrity of some sort. Blue Peter presenters have always been a popular choice, but even George Takei, aka Hikaru Sulu from Star Trek, has done the honours. If any traditionalists blanch at the thought of a non-Scot performing the roll of chieftain their complaints can be stifled by a well-aimed and well-intended bar of Highland Toffee. Well, it works for the kids.