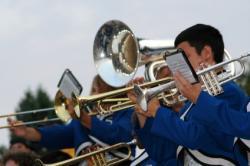 
The somewhat clichéd view of the Brass Band is that it is a northern phenomenon. But the existence of Torbay Brass Band, Sabrina Brass in Shrewsbury , Brass Fusion in Henfield , Milton Keynes Brass and many others gives the lie to that idea; and the Helston Town Band and its famous Furry Dance is a perfect example of such an ensembles significance to its locality.
It is, somewhat paradoxically, in the North of England however that the Brass Band is a National Institution. Those Brits able to name a Brass Band would almost certainly cite one from these famous four: Black Dyke from Queensbury; Brighouse and Rastrick; Foden from Sandbach ; or Grimethorpe Colliery.
The stories of three of those four are illustrative of the enduring power of the band in the face of economic change, symbols of community spirit: the mills that once provided support and players for the Black Dyke have closed; likewise the colliery in Grimethorpe; and the last Foden-branded truck was made in 2006. This theme was explored movingly in the 90s Pete Postlethwaite/ Ewan McGregor film Brassed Off, set in the fictional town of Grimley.
Such bands and others provide a focal point and a source of pride for their communities. But we should look beyond the social importance and consider first and the beauty of the sound they make, and the marvellous musicianship they engender. It can be a deeply moving sound, its frequency affecting us physically, vibrating through our bones as well as playing on our emotions: if you can resist the Salvation Army Band collection tin at Christmas, consider therapy.