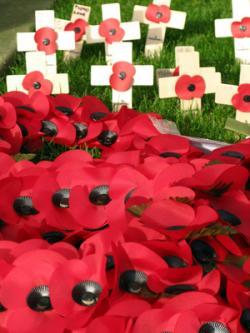 
Anyone who was born or brought up in Britain is so used to the annual appearance of Remembrance Day Poppies that their huge significance may slip from the mind. The recent spat with FIFA has had the side-effect of reminding us what the little paper flowers stand for.

During the horrific trench fighting in Flanders in the First World War the ground was churned into a muddy morass by artillery shells. One flower that still bloomed in these vile conditions was the poppy, a fact recorded in one of the most famous poems inspired, if inspired be the word, by the horrors of the warfare: In Flanders Fields, written in May 1915 by Canadian officer and doctor John McCrae. Its opening lines are: In Flanders fields the poppies blow, Between the crosses, row on row; and the third and final verse ends with the words We shall not sleep, though poppies grow In Flanders fields.

In November 1918 an American academic and humanitarian, Moina Michael, wrote a poem in response promising to keep faith with those who had given their lives, its third verse beginning: And now the Torch and Poppy Red We wear in honour of our dead.

The symbol of remembrance was taken up, a Frenchwoman Anna Guerin coming up with the idea of making paper versions, something quickly grasped by Field Marshal Douglas Haig in Britain. It is ironic that the man responsible for so many deaths with tactics not worthy of the word should have made his finest contribution to the war several years after it ended.

All year round about 50 people, mostly disabled ex-servicemen, labour in a factory in the London district of Richmond to manufacture the millions of poppies sold in October and November, raising huge amounts for charities linked to our armed forces. Sold by volunteers in the weeks leading up to Remembrance Sunday , when we commemorate all those who have lost their lives fighting for Britain, the poppy becomes ubiquitous for a brief time. That there is no fixed price for a poppy is one of the humbling and noble aspects of this tradition  it is left to our conscience to buy one, and what we pay for it.

Compare that laudable attitude with the revelations about certain of our politicians: one of the incredible insults to national dignity thrown up by parliamentary expenses revelations has been the efforts of various MPs  though when found out it often gets blamed on some junior staff member  to claim for poppy wreaths on expenses. The symbol of sacrifice that is the poppy makes the mindset of some in our political class all the more shocking. A similar failure of comprehension by FIFA has, however unintentionally, probably boosted sales of the little red flowers, for which while decrying their insensitive stance we should be grateful.