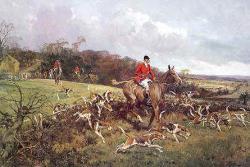 There was a time when the sound of the hunting horn, the glamour of the red hunting jackets and the barking of the hunting hounds was synonymous with the countryside. Enduring images exist in every British persons mind of monocled toffs sitting aloft their haughty horses shouting Tally ho! to signify that the hunt was on. Indeed, countless paintings based on countryside life depict just this colourful scene. Hunting may have started as pest control but it soon became more than a way of keeping down foxes and helping to prevent other pests from destroying the farmers livelihood. It is arguably an icon of country life and is still fiercely defended by rural folk to this day.

The anti-hunt lobby objects to the barbarism of the hunt, saying it is inhumane and inefficient. Ironically, the pro-hunt lobby will argue that it is actually a very efficient way of finding and ridding the country of foxes, as the dogs are the best experts when it comes to rooting out the sly old foxes. But images of a neighbours cat having been killed by the dogs is one of many that helped to win the public support for the idea that the hunt is barbaric. This eventually culminated in Tony Blair s Labour Government introducing anti-hunt legislation and fox hunting was banned .

The hunt still goes on though. So many Hunts are part of the traditional community calendar that it was simply too much to ask the people to stop meeting and donning the red jackets. And what of the hounds? What would they do now? The hunters still meet. The pomp, ceremony and excitement are all still there but now, in order to escape the wrath of the law, they chase artificially set trails. Ironically these are similar to the dummy trails that used to be laid out by hunt saboteurs before the hunt was banned! Some hunts continue to chase foxes, claiming exemptions from the legislation.

The red jacket is the traditional attire of the hunters and masters, most others invited to join the hunt will wear other colours, according to their role and status within the event. The Hunt has been part of British country life since the 16th century and this has meant that a whole industry, employing some 6000 plus people has grown up around the Hunt. Since the ban and despite fears to the contrary, there have been few job losses. This is mainly because the Hunts themselves continue, even if along limited lines compared to before. Fox Hunting is also practised in other countries around the world, many of whom model the hunt attire on the original British look.