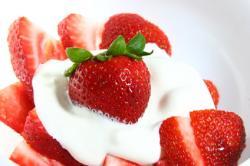 If there is one fruit in Britain that symbolises summer more than any other then it has to be the strawberry. Luscious and exotic, this plump red fruit is now available all year round in your supermarkets thanks to imports from around the world. But, if you want the real deal it has to be British strawberries from the British growing season; which is the summertime.

Strawberries are versatile and can be enjoyed on their own or in a large variety of combinations of foods. But one strawberry dish that is iconic of the British summer above all others is strawberries and cream.

However, other historians insist that the first person attributed with combining these two into the now legendary combination was actually Cardinal Wolsey , who predates Wimbledon by several hundred years. Cardinal Wolsey would have used the wild English strawberries and not the plump juicy fruit we know today.

The official strawberry variety sold at Wimbledon is the Elsanta variety which is grown not far away in Kent . The commonly consumed strawberries of today are based on a French experiment which combined the smaller English variety with a plump white strawberry variety found in Chile. In 1817 and 1821, however, English grower Michael Keens set the tone for the domination of the English strawberry grower by introducing Keens Imperial and Keens Seedling. These caused the beginning of what is known as strawberry fever which has gripped the nation ever since!