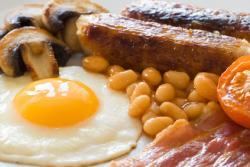 
Fried eggs, fried bacon, fried bread, fried tomatoes, sausages, beans, mushrooms, hash browns, toast and maybe even a slice of black pudding ; all ingredients found in a traditional full English breakfast. Once the farm workers hearty way to set themselves up for a hard days labouring in the fields, the full English breakfast has since become the standard way of packing in the necessary calories to get workmen and labourers of all sorts through the rigours of hard manual labour. That is not to say that it is necessarily the most efficient and healthy way to prepare for the day, and a quick look at the waistlines of an increasing proportion of British workmen will soon confirm this! But at least they are doing a job which gives them a chance to burn all those calories. Nowadays, the tradition of the full English breakfast is also enjoyed by a plenty of people with far more sedentary jobs. But many people love the taste and feeling of satisfaction after a full English breakfast, and dont want to consider the consequences for heart and waistline.

The ingredients of the breakfast are largely dictated by what was originally to hand. Eggs from fowl kept in the yard, bacon and black pudding from the last hog slaughtered, potato and whatever else was growing in the fields, cottage garden or could be obtained cheaply at the local market.

Nowadays ingredients have changed even if the basics are the same. Even vegetarians enjoy their own version of a full English breakfast. It seems nothing is sacred anymore! This version of the British tradition features no bacon or black pudding, but perhaps some veggie-sausages and even veggie-bacon will be included instead.