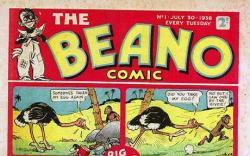 Since July 1938 D.C. Thompsons The Beano has been amusing children, and to be honest adults, though some of the latter would prefer to admit they were Noel Edmonds fans than own up to reading the Beano. Even Hitler, probably not a fan, could only reduce the frequency of publication as ink and paper were in short supply during WWII , when the adventures of Dennis the Menace, The Bash Street Kids, Roger the Dodger et al went fortnightly instead of weekly.
For some of a certain age buying the summer special Beano was a rite of school holiday joy, one of the annual milestones that ranked with birthdays and Christmas Day. And the regular visit to the newsagents to exchange a few coppers for an hours entertainment was for many of us a nice counterpoint to the steadier rhythm of school and family.
Exactly why The Beano has been such a continued success is not easy to fathom: the gags have never been of the belly-laugh variety, though perhaps the creaky puns and laboured practical jokes played on authority figures are funny for being so forced; and the pleasure of seeing parents, teachers, policemen and outrageously whiskered military men belittled and fooled by kids may be another part of the formula.
More than 70 years on from its launch in the rather unlikely comic hotspot of Dundee The Beano is still going strong, a bit more knowing than before, a bit more arch perhaps, but still as splendidly anarchic and British as when it started.