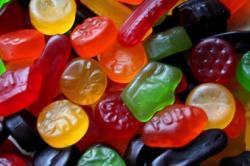 
On the face of it a simple sweet made from gelatine, sugar and flavourings is an unlikely British institution, but we include it for good reason  several in fact.
Wine gums are part of our national vocabulary  Hes been on the wine gums again, for example; or the current advert for a cheap German car where studenty grandson patronises his Nan with a jibe about them including real wine in her wine gums.
Add to that the Maynards ad campaign in the 90s  Hoots, mon theres juice loose aboot this hoos, with a manic dancing Scotsman and talking moose-head. Classic.
Thirdly, there is a pleasing air of mystery about the history of the product, claimed to be the invention of Charles Gordon Maynard in 1909. Has there ever been wine in them? If not, why are they called wine gums? (The most common explanation is that Maynard was a teetotaller and they were meant to distract drinkers from the evils of the bottle; brilliant idea). And why along with versions stamped with Burgundy, Claret etc are there ones with gin and brandy, obviously spirits?
Lastly, they are surely the most debated sweet: which brand rules? When to eat them, fresh from the packet and still gummy, or aged and a bit tougher? Which flavour is best (all right-thinking people agree blackcurranty-black)? Personally Id always go for Lions from the sweet-shop jar, preferably when its nearly empty, the gums hard and maddening in the mouth.
A warning: there is no wine in wine gums, but they are addictive. All the cool kids are eating them so you give it a try; you buy a few rolls, then next thing youre secretively eating full bags on short car trips. Soon youre doing Midget Gems. Of course you can stop anytime, but not just yet.