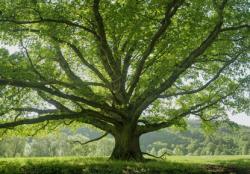 
The simple fact that the oak is the national tree of both Wales and England is enough to make it a national institution. But behind the choice lie a multitude of reasons that range through our history and our legends, illustrating our affinity for this most stately tree.
For the Druids the oak was, it seems, a sacred tree, their rituals practised in oak groves; and for the ordinary Celt it is said to have represented a portal to the next world. As a symbol of solidity and longevity special examples of the oak can be found in many places around Britain: perhaps the best known is the Major Oak in Sherwood Forest , linked with the Robin Hood story; but consider also The Royal Oak that sheltered Charles II from Cromwell s forces after the Battle of Worcester (a tree whose descendent is still to be seen at Boscobel House ) and provides so many pubs with a name, and eight naval vessels; the Law Day Oak on the edge of Romney Marsh ; or The Queen Elizabeth Oak at Cowdray Park . The power of the oak as a symbol remains today, adopted by both The National Trust and The Conservative Party (now in rather blurry form for the latter).
The oak has played a very practical part in our history too: thus the wooden walls of old England, i.e. the navy, were built from our great oak forests (reducing them enormously in the process especially in Nelson s day); and where would Scotlands whisky industry be without oak barrels old (from Spain and America) and new?
As a national symbol the oak provides a neat shorthand for certain aspects of what we perceive as our identity: steadfastness and endurance, and something great arising from the tiny acorns of our islands. Immodest perhaps, but with enough evidence in our history to prevent it being laughable.