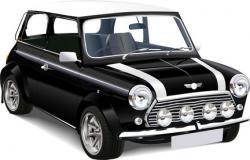 The humble BMC Mini was designed by Alec Issigonis in 1959 and remained in production in the original form until the year 2000. A new and totally revised version is now made by the present owners of the Mini brand, BMW. The original Mini, with its space saving transverse mounted front-wheel-drive engine and two door design was a revolution in affordable motoring. The car was simple, relatively cheap to buy and economical to run.

It was a unique combination of political and economic circumstances that helped spawn the Mini. Fuel shortages created by the Suez Crisis had caused a slump in the sales of big cars. This prompted management at the British Motor Company to order the creation of a small car. The head of BMC at the time, Leonard Lord decreed that the car should be capable of being contained by a box of 10 x 4 x 4 feet and yet have a passenger accommodation in six of the cars 10 foot length. The engineering and design solutions brought about by Lords strict design brief have influenced car design ever since. The Mini was a trend setter in more ways than just looks.

The Minis appeal wasnt all utilitarian though, the car was a design classic almost from the day it was introduced and became an icon that will always be associated with the Swinging Sixties . Theres even an uber-hip Sixties beach buggy, the Mini Moke, based upon the Mini chassis and drive-train.

Initially the Mini wasnt actually called the Mini. It was marketed by BMC as the Austin Seven (often written as Austin SE7EN) and as the Morris Mini-Minor. Both names are better than the previously planned Austin Newmarket! How different history might have been if that name had stuck!

The first Minis are very basic cars, although the manually sliding windows did allow for those convenient door pockets, reputedly sized by Issigonis to fit a bottle of Gordons Gin. The suspension was made of rubber cones, rather than the usual and bulkier coil springs. This system, combined with the positioning of the wheels at each corner of the car, gave the Mini its famously nimble go-kart style handling. If youve never driven a Mini youve missed one of lifes greatest driving experiences - they are seriously fun to drive!

Even though it was built as a cheap and basic car for the masses the Mini was incredibly successful as a competition car. In many classes it took on and defeated larger, more powerful and far more sophisticated cars and beat them. Nowhere more so than in rallying where the Mini rewrote all the rules in the Sixties with a string of victories including several at the prestigious Monte Carlo rally. Indeed, the French were so outraged by the success of the Mini at Monte Carlo that they disqualified them after taking first, second and third at the 1966 Monte Carlo. The Minis were dumped off the rostrum on the dubious grounds of an illegal lighting circuit and the victory was then awarded to Citroen, despite them running the self-same
headlight circuitry!

The Mini in its original form is no longer manufactured and true fans of the Mini do not seem to accept BMWs effort as the genuine article. But the original Mini lives on! Millions were made and, despite their uncanny ability to turn into a pile of flaking rust almost overnight, many of them have survived and will be cherished forever.