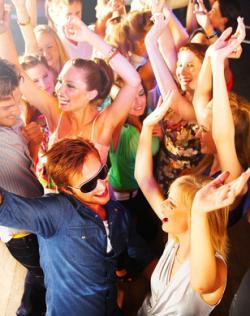 
The school disco, or whatever title the educational establishment of your parents choice may confer on the gathering  lets hear it for the social - is an enduring British institution. It has roots that go back to rather more formal occasions pre-war; but the hopes were doubtless the same then as now: to be noticed by someone; actually to have the courage to dance; and maybe even get the last dance and a surreptitious bit of physical contact  even, for the wildly ambitious, a snog.
Certain elements must be included. It will be a fund-raising event for the school itself, a charity, or a jaunt by some scholastic group. Parents will set strict times at which their little darlings will be collected; those same will inevitably be 15 - 30 minutes late. At least two groups will be drunk on (depending on the era) a thimbleful each of Newcastle Brown, fizzy cider, or some sticky alcopop. And everyone will complain about the music, often in the charge of some teacher barely out of puberty himself, though wannabee junior DJs are also a risky option.
Girls go to discos to dance together, look good, and attract older boys; boys up to 13 go to play with their mates, buy nasty sweets, slide trouser-kneed on the dusty assembly hall floor, and eventually to ask a girl to dance. They are bitter-sweet occasions, five get losts to every alright, but it is the alrights you remember.