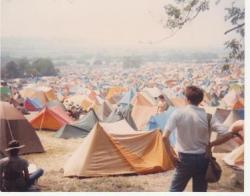 
The Glastonbury Festival can sometimes give the impression a taste for mud developed at Sebastopol and the Somme has been passed to later generations. But in contrast to the poor bloody infantry who suffered at both those battles their descendants at Glasto have entertainment rather than artillery shells to take their minds of it.
Since the first Glastonbury event in 1970, with the occasional year off to let the land recover, or to allow the facilities and safety measures to be improved, Glastonbury has been a major British institution.
There is something noble about the festival: Michael Eavis , on whose Worthy Farm it all began, and who still oversees it with his daughter Emily, wove hippie-tinged cooperative, charity and green elements into the fabric of the festival from the outset. It relies greatly on volunteers, who give their labour for free entry and their keep, wages being paid to charities they represent. Annual charitable income from the gathering has topped £1 million.
And there is something very British about the eclecticism of the event: performers who had their heyday in the 60s  say Paul McCartney or Ray Davies  and the 70s  Rod Stewart  mixed in with bands just hitting the big time. That eclecticism is seen in the broadening of the offering over the decades, with comedy and other art forms now represented.
If all that did not make it an institution, then the presence of both Hare Krishna and Millets would. Long may it continue. And may somebody eventually explain why it is not called Shepton Mallet , three miles closer to the farm than Glastonbury is.