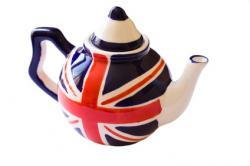 The British are certainly well known for their love of tea. Despite its origins in Asia, tea is seen by many as a particularly British drink and the countrys connection with tea dates back to the days of colonialism. During the heyday of the British Empire, the taking of tea in the afternoon became something of an act that celebrated British patriotism. The ceremony was even doggedly carried out in the searing heat of a far-flung colonial outpost.

So well known is the British habit of taking tea in the afternoon, that it is often parodied in comedy, both by the British. In the film Carry On Up The Khyber , the British ignore an attack from the locals that is tearing their fort apart as they openly take tea in the afternoon in an act of defiance. British military strategy wasnt actually influenced by tea drinking in this way but tea, and especially the importation of tea, played a huge role in the expansion and running of British Empire. This is particularly so with relation to India and China during the 18th and 19th centuries. Across the other side of the world, the Boston Tea Party was actually an act of defiance against the British Empire by the American colonials who destroyed a large consignment of British Tea. This single act is seen by many as the catalysts for the start of the American Revolution .

The tradition is now so strong that all the best hotels in London will offer you afternoon tea and pride themselves on the quality of the tea on offer. Afternoon tea typically includes a slice of cake and probably some sandwiches (stereotypically cucumber). Claridges Hotel at Mayfair claims to offer the best afternoon tea in London, complementing the choice of over 30 teas from around the world with finger sandwiches, cakes and pastries. However, this indulgence and luxury does come at a rather eye watering price at such establishments. Those wishing for tea on a budget will have to seek out a traditional but increasingly rare transport café, where tea and toast are still on offer for pence rather than tens of pounds.

Afternoon tea is just another British custom that, while seemingly deeply ingrained into our traditions, is under threat from the spread of American culture. US-styled coffee houses that serve, ironically, Italian style espresso now litter every high street in every town. The taking of afternoon tea does not seem to be maintaining the same level of appeal to younger British people, many of whom have probably never sat down in the afternoon to enjoy good quality tea poured into delicate china cups from a proper tea pot.