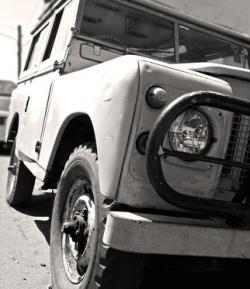 
Even after ownership of Land Rover has passed through German, American, and into Indian hands; even with the plans to move some manufacturing to China to save money, the car itself remains essentially British.
To clarify one point early on: Land Rover here means the proper breed, including the Discovery at a pinch, but excluding the Range Rover and the Freelander  they arent ugly enough to qualify.
The essential Britishness of the vehicle designed in Anglesey and made in Birmingham and then Merseyside remains, perhaps even for versions made for many years in overseas plants. Cynics might say this is because some models have over time earned a reputation for breaking down. Enthusiasts would point to the Bulldog face of the car; to the robust simplicity of its engineering until recent times, making it a frequent choice for armed forces globally; and to its endurance.
According to a bloke in the pub (so it must be true) 98 per cent of those built since 1958 are still operating; another claim is that three quarters of all Land Rovers produced since the first rolled off the line in 1948 are still running. Its easy to believe both assertions.
The Land Rover adorns many parts of our national life. Of the more than 4 million made about half seem to live on farms, often with that rear cover like a mini-Nissen Hut; they carry the landed gentry to shoots in the Highlands ; transport troops; haul boats from sea and lake; are de rigueur for mountain rescue teams; and soft-tops look cool for minted students. Its an institution.