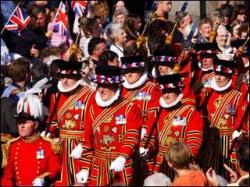 
In a very real way the Yeomen of the Guard are an elite corps. With certain regiments over the years family connections and wealth have ensured a place for junior officers; with the Yeomen of the Guard the qualifications are far more weighty and honourable: those appointed by the Sovereign, who is provided with suitable candidates by the Lord Chamberlain, must have served at least 22 years in the services, though not the Navy as strangely the Senior Service oath is to itself  in fact the Admiralty  rather than the monarch. Those eligible are over 42 and under 55 when they are inducted into the corps, with a clean service record denoted by their possession of the Long Service and Good Conduct Medal, and have attained the rank of sergeant or higher, though Ruperts need not apply  commissioned officers have no place in the Yeomen.
All very well, but what visitors to this country or spectators at ceremonies like the Royal Maundy Service where the Yeomen provide the Queen with a bodyguard want to know is: why the very distinctive uniform? Henry VII in 1485 was the first monarch to have the Yeomen in his service, and the Tudor-style predominantly red uniform reflects that, featuring the Tudor Rose as well as the initials of the current sovereign and to draw in other parts of the Kingdom the thistle and the shamrock.
To avoid embarrassment: the Yeomen are not the same as the Beefeaters who are found at the Tower of London ; they are distinct bodies. To avoid disembowelment: these were the hard-men of the services; if you feel tempted to laugh at the red stockings and knee-breeches, look up at that ceremonial pike and use your imagination.