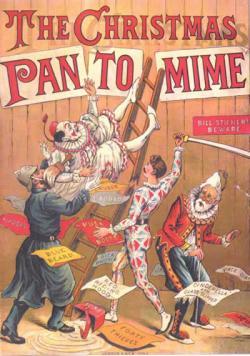 Oh yes he is! and Oh no he isn't!. If you find yourself shouting this then it can only mean one thing: It is Christmas time and you are at the pantomime! The spectacle of the pantomime derives its name from an ancient Greek form of popular theatrical entertainment involving narrative and musical content. This spread to Rome and a later derivation from this, the 'Commedia dell'arte' from Italy, reached the English shores in the 16th century. This laid the foundations for something that evolved to become a uniquely British tradition; the Christmas panto.

Originally, pantomime performances were limited to short interludes in between the acts of more weighty operas. The first performance of Cinderella as a full pantomime was at the Drury Lane Theatre , London in 1804. Alongside Aladdin it has remained one of the most popular pantos to this day. In the early days of modern pantomime, the cast would almost certainly be all male. At this time it was not considered a fitting job for a woman; in fact if a woman was described as an 'actress' it was often a polite way of saying she was a prostitute. To this day, although female actresses are quite acceptable and very much a part of the pantomime, it is still traditional to have at least one male actor appearing in 'drag'.

Whilst many other traditional forms of entertainment struggle to survive in a world of Playstation 3s and Nintendo Wiis, the old panto seems to be thriving. Every major town and city will run at least one panto at a local theatre. The inclusion of TV personalities and soap-opera stars helps to ensure that the love of panto has passed down to the next generation. Each year the panto circuit attracts full houses everywhere, even though many run for a whole month.

The principle ingredients that make up British Pantomime are the actor in drag and the all-important audience participation. There is always plenty of sing-a-long type songs and comical overacting. The make-up is stylised and extreme and the action is often rather slapstick in nature. The story line is well known and traditional, it is rare for a panto to stray from the popular standards and the plot is always rather simplistic. The panto is made to be enjoyed by all ages, from very young children to the grandparents who may well be hearing that simple story-line for about the fortieth time!