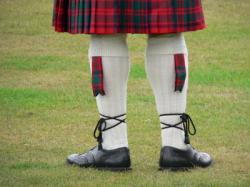 
The kilt is a knee-length garment which originates from the traditional dress of men and boys in the Scottish Highlands of the 16th century. It is usually fashioned from woollen cloth featuring a tartan pattern and pleats at the rear. It is traditionally worn with a sporran, or purse. The regalia worn today with a kilt, the sporran, belt, knee socks, brogues and a formal Argyll or Prince Charlie jacket is a modernisation of the old Highland great kilt which was a full length garment. The short kilt developed sometime around the beginning of the 18th century. The kilt is now regarded as the formal dress or national dress of Scotsmen. Although essentially a male garment, the
kilt has been developed for women to wear too. A tartan kilt, or skirt, is a popular choice for girls school uniforms and ladies wear kilt-styled skirts and dresses such as those worn by the Highland dance troupes.

After the Jacobite Risings , and as part of a series of draconian measures aimed at suppressing Scottish nationalism, the government of King George II imposed the Dress Act in 1746. The act outlawed all items of Highland dress including kilts in an attempt to destroy highland culture. The penalties of six months in an appalling prison for the first offence, and seven years' transportation for the second made it abundantly clear that the authorities meant business. The ban remained in effect for 35 years. During the period of the ban an exception was made for the armys Highland Regiments who continued to wear the kilt. Many Scottish regiments are still associated with the kilt and indeed there was a time when they would have gone into battle in the kilt. Many Scottish units wore kilts in active combat during WWI . The Royal Highland Regiment wore them during this conflict and this, combined with their bravery, led to the regiment acquiring the nickname Ladies from Hell from the German troops forced to fight them. The kilt was last worn in action near the start of WWII , in May 1940 at the Battle of Dunkirk by Donald Callander of the Queens Own Cameron Highlanders. This was the last time a Highland Battalion fought in the kilt but soldiers still wear kilts today as ceremonial dress. The banning of the kilt in 1746 of course meant it simply became even more associated with Highland pride. The prohibition helped romanticise the kilt and, once the perception of the Highland clans as a threat had gradually subsided, the kilt even gained acceptance in polite society. Without this transformation in the kilts reputation it is unlikely a kilt would have become acceptable formal dress at functions such as weddings.