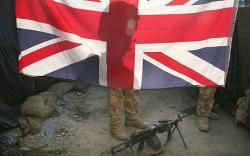 Renowned worldwide as a defining British trait, the stiff upper lip is possibly the characteristic that is most associated with Britishness above all others. Curiously, the expression itself is not of British origin. The earliest know usage comes from an American newspaper dating back to 1815. Whatever the origins, the stiff upper lip is now known by all as the correct response of any true Brit in the face of any adversity. Stiff upper lip, old bean! the haughty colonel might remind us as we face a charging rhino on the plains of Africa.

The term stiff upper lip defines a show of grim defiance in the face of the worst that your enemies, or even life itself, can throw at you. A sign that the body can be broken, but the British spirit will live on! Or perhaps, even if the British are broken by the trials and tribulations that face them, theyll never show it. The correct British way is not to show ones feelings quite so easily as the continentals do. The British have a worldwide reputation for being reserved and keeping their emotional state hidden behind a stiff upper lip.

Generations of British males have grown up with a fear of showing emotions, sometimes to the detriment of their sanity! The Victorian era possibly marked the zenith of this tradition but nonetheless the tendency to bottle up or hide the emotions remains strong in the average British male. Boys don't cry was the oft used expression, and boys were instead encouraged to develop the skill of controlling that tell-tale top-lip wobble. Lip wobble is, of course, the natural physical response to difficult emotions and it is an acquired skill to counter this reflex. Fortunately, as times have become more liberated, the British male has very slowly started to learn to express his emotions a little more. But most British women will probably tell you that this process hasnt yet gone nearly far enough!

One of the finest examples of the stiff upper lip and the spirit behind it is found in the classic Michael Caine film 'Zulu' . Caine is leading a handful of British 'Redcoats' who are trying to defend Rourke's Drift in what seem like a hopeless stand against the overwhelming odds provided by a massive Zulu army. The defining stiff upper lip of all time is surely to be seen in this film at the moment when a frightened young soldier about to face certain death at the hands of a horde of Zulu warriors asks the sergeant Why us? Calmly, and without emotion, the sergeant turns and replies Because we're here son, because we're here.