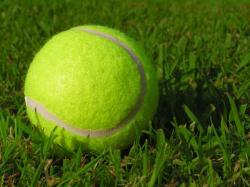 
We invented football, rugby, golf, cricket and tennis, gave them to the world and took a pasting, though in the case of tennis it took a while  the first Wimbledon Championships in the new sport of lawn tennis were held in 1877 (for men  women waited until 1884), and no foreigner took the title until American May Sutton in 1905, Aussie Norman Brookes the first overseas man to triumph two years later.
Wimbledon , strictly amateur until 1968, is also a mirror to the strange survival of our class system. For most of us getting a ticket involves luck or hard work - participation in the annual draw or ages spent in our true national sport of queuing. The rich and powerful have debenture seats in return for their investment in the club. And players must bow to the Queen (perhaps understandably) and Prince Charles (mysteriously) when they attend the royal box.
There is so much about Wimbledon that makes it an institution: yes the strawberries and cream , and yes their ridiculous price; the bright green grass (South Londons little piece of Cumbria , where the turf originated), which makes the championships authentic and arguably still the nearest thing to a world championships  the clue for the rest is the games called lawn tennis. Add the brief dash to municipal courts by working-class youngsters often with more talent than 99.9 per cent of the LTAs endless stream of plucky posh kids; and the excellent coverage by the BBC  though for every Dan Maskell there will inevitably be a John Inverdale  going since 1937 and yet to film a British mens champ, and its easy to see why this is one of our great milestones, pointing toward school holidays and the seaside.