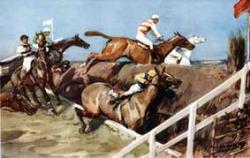 
The Derby is for racing purists; the 2000 and 1000 Guineas for the owners; Cheltenhams Gold Cup for the Irish; but The Grand National is the race for the British people  and at the last estimate, about half a billion more around the globe.
It is a race that is easily understood by those who never watch another horse race all year, starting like a cavalry charge and proceeding like a hunt over the distance of just under 4.5 miles. The height and number of the fences brings in the element of danger, making finishing at times something of a lottery, as Foinavons famous 100-1 victory in 1967 showed. Sadly horses die in the race, which is not easy to justify  and one jockey died of his injuries back in 1862.
But it is undoubtedly a national institution, run since 1839 (or arguably 1836): grannies, vicars and freelance writers who dont place a bet on anything else all year peruse the papers for guides to form; listen to experts spouting nonsense; or choose a horse because they like the colour of its jockeys silks; or something in a name stirs them  when Party Politics won in 1992 with an election campaign in full swing the bookies took a pasting. Shame. The National has produced heroes human and equine: three-time winner Red Rum became a four-legged celebrity, albeit with more charm than most two-legged versions; Bob Champions 1981 success after beating cancer touched the country; and the Duke of Albuquerques repeated fruitless efforts made him a legend. Villains too  the 1993 start fiasco made some names mud.
Every April on one Saturday afternoon we gather round TV sets, or even make our way to Liverpools Aintree Racecourse , clutching our office sweepstakes tickets or betting slips  one day my forecast bet will make me rich. But meanwhile there is always next years event.