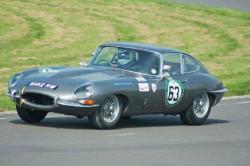 
The most British segment of the car market, when we had a meaningful place in it, was the sports car. And while MG made some fine contributions to the class, Aston had its moments, and the TR6 was hunkily attractive, the zenith for the breed was surely the E-Type Jaguar.
Launched commercially in 1961 the car was the four-wheel symbol of the sixties , an instant piece of style in many movies and TV series  most famously in The Italian Job where it was pushed over a precipice, signalling war between the British and Italian gangsters. It was put down in the 1970s, the era that gave us the bloody awful TR7.
When Enzo Ferrari called it the most beautiful car ever made he was surely referring to a roadster in silver or red, maybe navy blue, though no petrol-head would kick any version out of bed. It even features in Manhattans Museum of Modern Art. But there is a gulf between art and functionality, and the engineering did not, could not match the looks. But would you swop a technically superior in every way Lexus for an E-Type? Like a shot. And not just because a good one is worth a kings ransom now. Its because the E-Type is Twiggy , George Best , The Beatles , the entire England World Cup Squad of 1966 (sorry other components of these islands), and a good steakhouse where nobody knows what coulis is. It has British soul, and remains an institution.