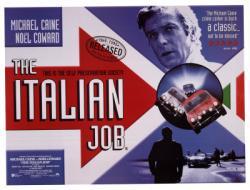 Few films have become such a part of our shared national culture as The Italian Job. England football crowds still sing Self Preservation Society. Anyone in the pub asked to quote a line from the film will impersonate Caines: You were only supposed to blow the bloody doors off! And the (literally) cliff-hanger ending has gripped our collective imagination so much that recently the Royal Society of Chemistry ran a competition to find what may have been in Crokers mind when he speaks the last line in the movie: Hang on a minute lads, Ive got a great idea.
Made in 1969 when London was still swinging and all things British were cool, the film featured iconic British actors from various eras and genres: Noel Coward ; John Le Mesurier ; Irene Handl; Benny Hill in a part that fitted him like a glove; a very young Robert Powell; and of course Michael Caine in one of his most famous roles as criminal Charlie Croker. A cast any director would give his producers right arm for. And no less iconic were the timelessly beautiful British cars featured: E-Type Jags ; an Aston Martin DB-4; and the Mini Coopers central to the caper plot. An artful film without arty pretensions. The stuff of genius.