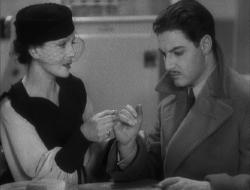 Ah! a time when all adventurers had moustaches and jauntily tipped hats, and all leading women were blonde and beautiful. Hitchcock s 1935 film is based only very loosely on John Buchan s page-turner of 1915, but in spite of major differences they both grab you and propel you from one death-defying moment to the next. This is a thriller with no pretences to being anything else, though part of the thrill is following the bumpy course of true love. Robert Donat plays Richard Hannay with knowing charm; Madeleine Carroll as his unwilling companion (the love interest in the film where the novel had none) is spirited, engaging, and quietly sexy  which red-blooded man would not want to be handcuffed to her? And Godfrey Tearle makes a suave and cold-blooded villain that pre-war kids in the 2d seats would have booed roundly. The plot is as ludicrous as Buchans was implausible, but it doesnt matter: Hannay jumps from a train; escapes from the police; makes an impromptu speech at a political gathering (an episode common to film and book); and in the end wins the girl and saves Britain from dastardly foreign types. As we always know he will.