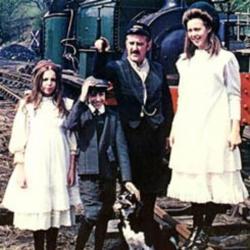 First things first: anyone not moist-eyed at the: Daddy; my daddy moment could be a pod-person.
Director and scriptwriter Lionel Jeffries produced perfect British cinema with his adaptation of E. Nesbit s novel The Railway Children. The story is about decency and family without ever being po-faced  Bernard Cribbins ensures that  building real tension in two plotlines. The locations, particularly the bridge at Wycoller, Haworth Parsonage, and Keighley and Worth Valley Railway , give the piece both beauty and a sense of place. And it brought together a memorable cast including Iain Cuthbertson, Dinah Sheridan, Sally Thomsett and Jenny Agutter - Thomsett at 20 convincingly playing the then 18-year-old Agutters 11-year-old sister. Ageing Tiswas fans will spot Sally James as a maid too.
The Railway Children, though archetypally British, gained international recognition, both Cribbins and Thomsett Oscar nominated in 1971. The film is still shown regularly on TV.