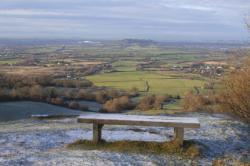 Roaming the Vale of Gloucester

The Vale of Gloucester is not one of our best-known areas for tourism. Far more people know about, and visit, the neighbouring districts of the Cotswolds to the east and south of the vale, likewise the Vale of Evesham that borders it the north, and the Forest of Dean a short drive south-westwards. But visiting the Vale of Gloucester you may wonder why this is: for those seeking a picturesque and quiet spot in the heart of England it is a gentle and genteel haven.
Following the course beyond Gloucester of our longest river, the Severn , the Vale is a country of green riversides, verdant meadows, and pleasant rolling hills. If we define the area as beginning beyond the city of Gloucester and ending around Tewkesbury, including the latter but not the former; and bordered by but excluding Cheltenham, its compactness is evident. But again that is in its favour: this is somewhere to roam in and get to know, not dash about.
Travel to the area is easy. There are rail links to Gloucester, Cheltenham and Ashchurch for Tewksbury; the M5 runs north-south through the eastern part of the Vale; and Gloucestershire Airport is found at the southern end.
While this is an area of fine black-and-white villages, the best starting point is surely the town of Tewkesbury . And a lovely old town it is, the abbey church saved from Henry VIIIs predations by the townsfolk who clubbed together to purchase the massive Norman structure that is St Marys for the grand sum of £453. That building is famed for its tower (some claim it as the finest of its type anywhere) and arches, both of prodigious size. Its a good place for old inns too, and makes a fine introduction to the timber-framed architecture seen in smaller settlements nearby. Some of the older structures that should not be missed here include the House of the Nodding Gables, the Cross House, and the 15th century Ancient Grudge, all black-and-white edifices of great character. The meeting of the Avon and Severn at Tewkesbury means it is also rich in waterside, with craft available for hire if you fancy a day of simply messing, messing about in boats .
Just to the west of Tewkesbury is the village of Forthampton, rich in old buildings like its Victorian almshouses and Forthampton Court, once a residence of the Bishop of Tewkesbury, but perhaps of greatest note for the stocks and whipping post in its churchyard. Judging by the capacity  three miscreants  the locals must have been somewhat feisty in days gone by.
In the Vale proper you will find an equally fascinating selection of old buildings, at Deerhurst two that make Tewkesbury Abbey seem young  Oddas Chapel and St Marys Priory Church in Deerhurst (the village worth visiting even if churches are not your thing) both of Saxon origin, the chapel dating from 1053 of particular interest as having been little altered in spite of its incorporation in a farmhouse for many years  the half-timbered farmhouse indeed still adjoins what was once a royal chapel. The chapel is magnificent in its simplicity.
The National Trust maintains a beautiful tithe barn at Ashleworth , a short drive along pretty country lanes from Deerhurst. The huge barn  entry not charged - with stone-tiled roof is a stones throw from the Severn, so at the heart of this valley in the Heart of England. The church, as elsewhere in Britain, was obviously a major force in local life in past times, evidenced by several of the place names hereabouts: Bishops Cleeve; Priors Norton and neighbouring Bishops Norton.
Another barn managed by the National Trust, though not with the ecclesiastical link of Ashleworths, is to be found a little north of Tewkesbury at Bredon . The solid medieval structure has much about it that is not really old, having been rebuilt after a fire in 1980, but is no less impressive for that  in fact you surely have to admire the craftsmanship of modern times using traditional materials as much as the work of our 14th century ancestors.
If your visit coincides with the passing of the Severn Bore , a surge of water along the great river, you could do worse than head for Maisemore and Alney Island. The old bridge across the river, now just for pedestrians, gives a grandstand view of the natural phenomenon.
This is country for taking your time, and we can think of few more pleasant ways of doing so than inside a village pub, of which there are many to be found in the Vale. Make your trip in the summer and you could add fresh air and a view to the experience by sitting in a beer garden if you can be dragged away from the cosy interior. A slightly more adventurous way of enjoying the view is to head to Cleeve Hill on the edge of the Cotswolds , the highest point in Gloucestershire that on fine days offers a panorama that takes in the entirety of the Vale in one sweeping scene. End your trip here to recap your break, or begin it to help make plans.
Information Britain has a range of accommodation options in and around the Vale of Gloucestershire, ancient and modern, grand and modest, to suit just about every taste.