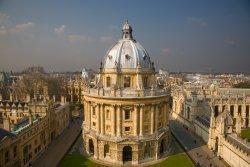 A Literary Break in Oxford

In the centre of Oxford at least it is almost more difficult to find places without literary associations than with. Not surprising really given that over the centuries many of this countrys finest minds have passed through the university, thus college after college has a roll-call of famous writers. Add to that the citys use as a setting by some of those writers and others, and you start to understand the enormous cultural wealth here.
To begin your literary break we suggest you simply stroll around the colleges , breathing in the atmosphere that has inspired generation after generation of scholars, some who graduated from studying literature to producing it no doubt bolstered in their efforts by the beauty of the buildings, though others are less complimentary  Cobbett wrote disparagingly of those buildings and: The drones they contain and the wasps they send forth.
Perhaps the best starting point, in literary terms at least, would be Oriel , given that one of its alumni, Matthew Arnold who was a fellow in the college, gave the city its most famous description when he wrote of its dreaming spires. Christ Church a short distance away claims Auden and Lewis Carroll along with Philip Sidney , but is possibly more famous now for a somewhat different association  the dining hall used as the great dining hall of Hogwarts in the Harry Potter films. Brasenose produced John Buchan , though he had already published while a student in Glasgow, and later the Nobel laureate William Golding of Lord of the Flies fame; less racily it also has critic Walter Pater as an alumnus. Arguably the top literary dog as it is so often the top intellectually is Balliol  the effortless superiority of the Balliol man  with Swinburne , Gerard Manley Hopkins, Grahame Greene , Hilaire Belloc , Anthony Powell, Aldous Huxley , and even Adam Smith associated with its halls. Magdalen has the saint  C.S. Lewis  and the sinner  Oscar Wilde  among its literati. University College sent down Shelley for writing The Necessity of Atheism, but now has a statue of the poet in its quad. By their works shall ye want to know them it would appear.
A college of particular literary weight is Hertford , in that it produced Evelyn Waugh  thumbs up to the writer, vees up to the man - and provided the setting for his fictionalised account of Oxford undergraduate life in the 1930s in Brideshead Revisited, the novel that most colours our views of the university even now.
Exeter College is another that produced both writer and gave him material for a great setting: Philip Pullman studied English there, and Jordan College in Northern Lights is based on it. Pullman wrote Lyras Oxford to offer readers of his His Dark Materials trilogy a guide to the places in his fiction and their real-life counterparts.
It is not unknown for writers, like visitors, to take an interest in pubs. The most celebrated is surely the Eagle and Child at 49 St Giles, preferred meeting place of the literary group The Inklings, most famous members C.S. Lewis and J.R.R. Tolkien  it is supposedly here that the immortal line: Not another f...ing elf, was muttered by another writer as Tolkien ploughed through his masterwork.
A nearby establishment and rival in artistic terms is the Lamb and Flag at 12 St Giles, where Graham Greene, who coming from a brewing family perhaps felt honour bound to shift more than his fair share of booze, spent many a happy and eventually hazy hour.
The White Horse , beloved of Inspector Morse, can be found on Broad Street, surrounded by bookshop premises. Morse sites in Oxford can be explored in a piece found in our cultural section , and they make a tour in themselves. But so too, keeping to our bookish theme, do the citys bookshops , of which there are many.
Most famous and biggest of the bookshops is Blackwells on Broad Street, a place to browse and buy. Oxfam , which of course started in the city, is a good place for second-hand books at bargain prices, but definitely pot-luck applies. Rare volumes can be found at Temple Rare Books in Headington, and again at Blackwells, and there are various specialist literary retailers such as The Inner Bookshop on Magdelen Road.
There are various hotels and other accommodation options in Oxford with literary associations in themselves  the corpses Morse investigated for example often very well-heeled and staying at fine places when they died horribly. Information Britain has a wide selection of places to stay in and around the city, which is as well as being rich in literary links is one of the most beautiful in the country. Take a book, buy some more, read, sip a beer, stroll around and enjoy your stay.