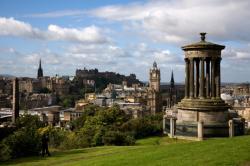 The Athens of the North

It is not clear who originated the phrase Athens of the North regarding Scotlands capital. But its a useful description of the period from about 1735 to 1860, when Edinburgh was one of the great centres of European thought and literary creativity. There are many other reasons for visiting Auld Reekie (or Auld Greekie as some have it to incorporate the Athenian link), not least the famous festival in August and September, but for those primarily interested in what could rather dryly be dubbed intellectual history a visit outside that hectic time is recommended.
The sharp-eyed visitor to Edinburgh will observe an acropolis-like building atop Calton Hill in the centre of the city, but that was built in 1816 to honour the dead of the Napoleonic Wars (not greatly honoured as funds ran out so it was never close to being finished). The columned monument is a pleasing coincidence rather than being a mark of Edinburghs relationship to the Athens of Socrates and Plato.
There is, however, much of the architecture whose arrival created or at least enhanced that era. The entirety of the New Town, Georgian and Regency building often at its most elegant, was instituted in the 1750s and constructed between the 1760s and 1830s: wide-open and airy streets like Princes Street in stark contrast to the medieval wynds around the castle; beautifully proportioned buildings nothing like the precipitous and famously smelly tenements of the Old Town. The main architect James Craig is not as famed beyond Scotland as others who contributed like Robert Adam and Thomas Hamilton . Adams Charlotte Square is a masterpiece, No. 7 now a museum replete with period furnishings and equipment.
Equally illustrative of the times are great public buildings like the National Portrait Gallery in Queen Street (where you can gaze at images of Burns, Boswell, Hume, Scott and many others of our period), the Royal Scottish Academy, and the National Gallery of Scotland . Look out too for the bank and insurance company buildings that speak volumes of the growth of Edinburgh into the financial centre it remains today: the redevelopment of the city was planned to attract back the wealthy Scots who had decamped to London after the Acts of Union in 1707; the banks were one sign of the success of that policy; the burgeoning of intellectual life there another.
But we should focus on our Socrates and Plato, in Edinburghs case perhaps rolled into one in historian and philosopher David Hume , whose works it can be argued are equally as important to modern European thought as those of his Athenian predecessors. The first home of his own (taken on when he was 40, 12 years after publication of his seminal 1739 work Treatise of Human Nature) at Riddles Court, 322 High Street, is now preserved for posterity, and a fine old building it is too  an example of a 16th century merchants house. He later moved to the Georgian splendour of St Andrew Square, persuaded to locate in a fine house at the corner of that square and St David Street by Robert Adam who hoped his leading-light status would entice others to follow him from Old to New Town.
Of course Hume was far from alone intellectually in Enlightenment Edinburgh. James Boswell , born in Parliament Square, corresponded with the philosopher, aped his manner, and at one time threatened to write his biography  he even followed Hume into the latters previous residence at James Court on the Lawnmarket.
Hume and Boswell both attended Edinburgh University, founded in 1583, as did Thomas Carlyle, (even Oliver Goldsmith was a medical student here) and Walter Scott: one of its finest buildings is another Adam creation. The ideal place to make for to bathe in information about Scotlands writers is The Writers Museum on the Lawnmarket, a spot not lacking in atmosphere either.
With Sir Walter Scott Edinburgh and Scotland found a novelist to celebrate (and at times create) their history, restoring national pride with his insistence on unearthing the Honours of Scotland from their century-long storage in a strong-room in Edinburgh Castle for example. His birthplace (though the building has gone) is marked by a plaque in Chambers Street; likewise his home between 1774 and 1797 in George Square. A statuette above the door of one of his married homes, 39 Castle Square offers a miniature salute to the writer of the Waverley Novels, dwarfed by the huge gothic Scott Memorial in Princes Street Gardens, completed in 1844.
It is a truism to state that not all writers and philosophers spend their every waking hour in contemplation and study. Edinburgh has some fine pubs and inns, many of them frequented by such figures. There are literary pub crawls  sorry, tours  that will take you round such inspirational places. For your accommodation needs, however, this site has plenty of options on its Edinburgh pages which we hope you will enjoy browsing.