"You may travel the world over but you will find nowhere more beautiful; It is so restful, so colourful and so unspoilt (Tenby)"
Augustus John 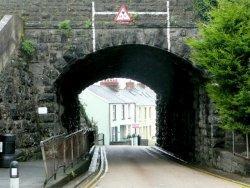 June
The Wales Swim for the Cystic Fibrosis Trust

Wood Park Caravans
"We love tenby! However we don't love this site. All the bad reviews about miserable staff are true. On arrival I was greeted by two miserable women, There was no welcome pack or the ..." More

Wood Park Caravans
"A lovely site but a shame about the lady that runs it and another lady that helps ,there attitude was terrible and very rude ,I am convinced because we were ..." More

Wood Park Caravans
"Lovely site, but what a shame about the owner blunt and very rude, with a sharp voice that scared our children, although the other staff are very pleasant and helpfull, ..." More

To celebrate our 25th Anniversary we decided to visit Tenby ...More

The Normans established an early castle-borough at Tenby-its promontory position being ideal for defense and a natural maritime port. Although there are signs of much older dwellings it was the Normans who developed a community, although the Welsh name -"Dinbych-y-pysgod" means Tenby of the Fish appears in the 9th century. The castle was established in the late 11th century. The Norman town and castle were destroyed by Llywelwyn ap Gruffudd in 1260. The medieval town was re-built by William de Valence who issued the first borough charter in 1280. The Castle was rebuilt , the town laid out on the western slope and protected by stone walls. St.Mary's church was re-built , although there are some signs of Norman structure.
By the late 14th century Tenby ahs emerged as a prosperous town due to fishing and trading links with Brittany, France and Ireland. By 1329 the population was about 1500. The town had a weekly market on a Wednesday and an annual fair. The focal point of the town was the quay at the foot of the castle, which was built in the early 13th century and had a chapel at the end of it built by Warren de Monchensey. Part of the pier is incorporated in the new pier. In 1328 the town received a murage grant and substantial sections of wall remain. In 1457 Jasper Tudor carried out extensive refortification. Much of the walls and gates remained intact until the 2nd half of the 18th century.
The burgage pattern can be seen off Frog St and High street. The Tudor Merchant House is an example of early architecture in the town. The town survived attacks by the Glyndwr rebels.
The town continued to prosper until the 2nd half of the 17th century when Narbeth market led to a decline in its fortunes. Although suppressed for a while the decline continued and by 1670 the population had fallen to 850. In 1810 there were 800 inhabitants. However by the 1830's the figures had soared to 2100 with the growth of tourism and the twice weekly steam packet from Bristol with Tenby emerging as a principal Welsh resort.
Tenby is a lovely old walled town (with much of the wall still intact) with three of the loveliest and most popular award-winning beaches in Pembrokeshire. Visitors are spoilt for choice when it comes to places to eat and drink, and there's ample choice of accommodation to fit all tastes and budgets and ages. Population 5,000

Places to Stay near Tenby

Deer Park is ideally situated to the centre of Tenby town, just outside the old town walls, we are in a perfect location to base your stay in Pembrokeshire.

On the cliffs above Tenby's sheltered, sunny North Beach, Fourcroft looks spectacularly over the old fishing harbour and across Carmarthen Bay. Though only five minutes walk from the mediaeval walled town centre, with its quaint alleys, ... More | visit website
map book

The Royal Lion Hotel appeals essentially to those who on holiday look for peace and quietness amongst surroundings of interest and beauty. Its greatest asset as it nestles behind the Old Town wall lies in ... More | visit website

Roch Villa is a family run bed and breakfast with three letting bedrooms. Roch villas, is situated close to the railway station, and also walking distance to town and all beaches. The bedrooms are not ... More | visit website
map website

The Proprietors would like to offer you a warm welcome to the Ivy Bank Guest House, which was built in 1895 as a fine Victorian home. It has been run as a guest house ... More | visit website
map website

The Normandie, can be found nestled between the Medieval Town Walls and Upper Frog Street in the picturesque seaside resort of Tenby, in the Pembrokeshire Coast National Park, on the South West corner of Wales.

Langdon Villa is a quiet family-run Tenby guest house. Owners Graham and Debbie extend a very warm welcome to you as you start your holiday break in the unspoilt seaside resort of Tenby. Tenby's Premier ... More | visit website
map website

Built into the old stone walls of the old town The Imperial Hotel enjoys a stunning cliff top location offering some of the most picturesque views of both Carmarthen Bay and the Pembrokeshire coastline. The ... More | visit website
map website

Step through the Atlantic's portico entrance and there's a sense of peace - an atmosphere of timeless elegance that's been carefully preserved so our guests can enjoy the luxury of a most relaxing environment.