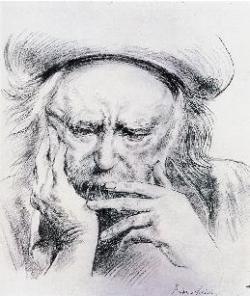 'You may travel the world over '... More

Augustus John was the great bohemian painter, at least in his youth and middle years: full of energy and devoid of conventional morality, his personal life a model of scandalous disregard for norms.

Augustus Edwin John was born in Tenby, Wales on January 4 1878. With his sister Gwen he entered the Slade, studying there from 1894 to 1899. His evident talent was enough to win him admiration, but his outrageously bohemian  for which read promiscuous and drunken  lifestyle earned him opprobrium and publicity in equal measure.
In spite of or because of his reputation he attracted some extremely influential and wealthy patrons, among them Lord Beaverbrook. The great newspaper magnate obtained a position as a war artist for John with the rank of Major, but the painter promptly got sent home for his part in a brawl, needing Beaverbrook to fix matters to avoid a court martial. Beaverbrooks support was poorly repaid, John only known to have completed one war painting.

By the 1920s John was the foremost, and most fashionable, British portraitist, his depictions of Dylan Thomas and TE Lawrence examples of his ability to capture the substance of a sitter when he was moved to do so. He also painted the likes of Yeats, Churchill, and Hardy. Arguably, however, it was his portrayals of gypsy scenes, painted in travels with the Romany people in Dorset, Ireland and his native Wales that reflect his energy and ability far more than his portrayals of the rich and famous.

In his middle years and later life his once fashionable style became outmoded, and contemporaries left him behind in the rush to modernism. By 1942 he was enough of an accepted establishment figure with his dated rakish beard and jauntily tipped hat to receive the Order of Merit. His frequent affairs and many children by different women, however, kept him in the scandalised eye of the general public  but then no publicity is bad publicity for a studiedly bohemian artist.

Johns artistic passion to some extent transformed into a passion for politics in his old age. He espoused especially the anti-nuclear movement, even in his eighties taking part in a Trafalgar Square sit-in. He died on October 31 1961.

Contributors: Do you have a site related to Augustus John?
Supply some content for this page and we will gladly add a link to your site. Email here.