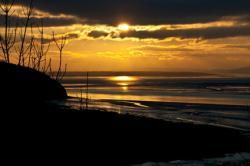 I was born in a large Welsh industrial town at the beginning of the Great War: an ugly, lovely town or so it was, and is, to me wrote Dylan Thomas in Return Journey.
Thomas spent more than half his all too brief life in Swansea . For all his reputation as a drinker and a hell-raiser he lived with his parents until he was 20. He was born in a rather genteel part of that industrial town, the suburb of Uplands. Here his birthplace remains  5, Cwmdonkin Drive, and one of his favourite childhood play places, Cwmdonkin Park, home to one of many memorials to the poet, can also be visited.
Though some of his youthful haunts were destroyed by WWII bombs  the Kardoma Cafe among them  others remain. He enjoyed strolling and lazing on the five miles of Swansea Bays sands, a simple pleasure for visitors still.
At the western tip of the bay lies the village of Mumbles , where he was part of an amateur dramatic group which met at The Mermaid Hotel, rebuilt since the war. He also drank at The Antelope Hotel, now just The Antelope . Mumbles once had a reputation for pub crawls along its famous mile, but these days has reverted to a quieter, rather old-fashioned seaside stop complete with pier.
Back in Swansea he frequented The Uplands Hotel, now The Uplands Tavern, and one of the areas oldest hostelries, The No-Sign Wine Bar in Wind Street, a place nowadays full of entertainment venues including a casino and cinema, once part of what the poet called sleepy midnight Swansea flowing and rolling round outside the house in his mocking autobiography A Portrait of the Artist as a Young Dog.
Lovers of Dylan Thomas work should make their way to what is now The Maritime Quarter, a smart and fashionable area with plenty to visit including The Dylan Thomas Centre, but used to be the docks where the young poet was wont to seek ladies of negotiable virtue.
In 1937 Dylans parents moved to Bishopston, only a few miles west from Mumbles, but very much part of the Gower Peninsula . The cliff-top village of Bishopston has three delightful beaches, and those with time should venture further along the Gower, a world away from busy Swansea , full of tiny villages and long walks, with a beautiful coastline offering marvellous seascapes.
In his childhood Thomas spent happy summers on the Carmarthenshire farm owned by an aunt, and in later life he spent some of his happiest times in Laugharne in that county, some 40 miles away along pleasant roads from Swansea, living in a succession of houses until his great patron Margaret Taylor bought The Boathouse for Dylan and his wife Caitlin.
The Boathouse is now another memorial to the writer, with his cliff-top writing shed on display. Pretty much unchanged in the village by the Taf is Browns Hotel, Thomas watering home when he resided there. Though he loved the town dearly, it reputedly provided the inspiration for Llareggub, the setting of Under Milk Wood, perhaps his greatest creation, an uneventful and complacent place.
Laugharne has some lovely Georgian buildings and older cottages too, as well as the 12th century castle dominating the town. In 2007 an annual literary festival was initiated here, though for Thomas lovers the event dedicated to his life and work, held in Swansea every October, may be of greater interest.