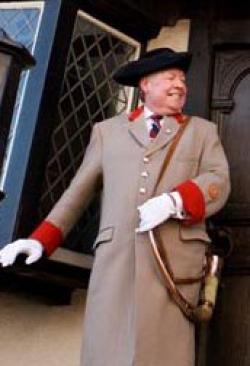 In the year 886, Alfred the Great visited Ripon and was so impressed with the beautiful settlement he had found and was most grateful for the support and welcome the people gave him that he decided to grant the community a Royal Charter. As it was a spontaneous decision he did not have a parchment scroll prepared or any thing similar, the only thing he had to offer them as a symbol of that charter was a horn.
At the time the country was in turmoil, and the Vikings were still very active, pointed out that the people should be vigilant or they could risk loosing all they held dear. he suggested that they appoint a Wakeman who would stay awake through the hours of darkness keeping a watchful eye while others slept safely in their beds. This they did, and further decided that he could put the horn to good use by sounding it at the four corners of the market cross each evening at 9 pm to let the people know the Watch was Set and they could retire to their homes knowing he was out there keeping a watchful eye.
The situation changed slightly in 1604 when a second charter was granted to the City by James I . By that time the population and the city had grown a great deal and the Wakeman who was elected each year by a small group of the most powerful men in the City had become all too powerful. It was at that time decided to replace him with a Mayor elected by vote by all the people, and the Mayor then appointed a Hornblower to Set the Watch on his behalf. The first Mayor, not trusting his Hornblower and so that he could keep an eye on him he put a rule in place that when the Hornblower had done his duty on the market cross he must report to the Mayor, wherever he is in the City and sound the horn three times in front of him to prove the Watch is Set. That is still done every evening today.

Over the centuries the office of Wakeman/Hornblower has been held by countless dedicated men. At present a plaque on the Obelisk lists the names of Ripon Hornblowers going back over 200 years. The length of service in the role varies widely. Some have served for over twenty years, others just a few months, but all stamping their own personality on the job.

The present Hornblower, George Pickles, a retired Machine Tool Engineer, took on the role of Hornblower in 2004 at the age of 67 shortly after he retired to Ripon with his wife from the Mill towns of the West Riding where he ran his own Machine Tool business for 30 years. Although there is Deputy cover for Holidays and emergencies he turns out himself to do the duty 300 nights each year.

George greets up to 12,000 people each year who come from all over the world to witness the ceremony, with up to 100 people being there on a single summers evening.