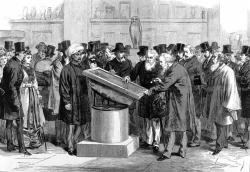 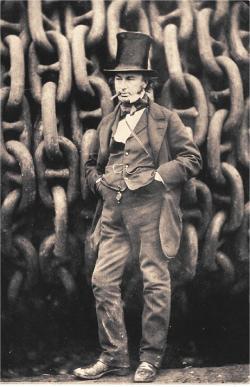 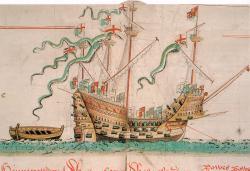 Sinking of the Mary Rose

War is a great locomotive of history, changing things in the present. In the case of the Rosetta stone war was historys excavator, turning up what proved to be the key to deciphering Egyptian hieroglyphs thus gifting us information lost to the world for centuries.
By the summer of 1799 Napoleons army, effectively stranded in the Middle East after the Battle of the Nile a year earlier, had returned to Egypt facing the prospect of local resistance and eventually British aggression. At the port city of Rashid, known to Europeans as Rosetta, French soldiers strengthening a fort came across a large piece of granite covered on one side with markings, which turned out to be in three different scripts: hieroglyphs; Greek; and seemingly a form of Coptic (later found to be Demotic). The potential importance of the object was swiftly recognized, and on July 19 1799 reported on by one of the scholars accompanying the expeditionary force: if, as it so proved, the Greek text replicated the message in the hieroglyphs, the stone could act almost as a dictionary.
After Napoleon had abandoned his troops, and their surrender and repatriation was negotiated with the British, the Rosetta Stone was reluctantly handed over as part of the Capitulation of Alexandria. Shipped back to London via Portsmouth , it was placed in the British Museum , where it is still the most visited exhibit. Plaster copies were provided to Oxford , Cambridge and Edinburgh universities, and Trinity College Dublin . The French had previously produced prints using the stone as a block. Experts through Europe were involved in the detective work that gradually led to an understanding of ancient Egyptian hieroglyphs, their meanings and sounds. Most notable among them were the Swede Johan Akerblad, Royal Society official Thomas Young , and an obscure (until his great breakthrough) French scholar Jean-Francois Champollion, generally credited as the greatest hero of the work.