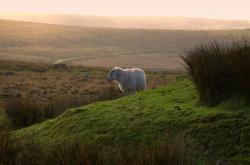 Did you know that Ashburton was the first town in Britain to have a Monster Raving Loony Party Mayor? Local publican Alan Hope first gained public office for the OMRLP in 1983, when elected to Ashburtons council; and in 1998 he became Mayor of the town. After moving to Hampshire he was elected to Fleet Town Council, and contested the Witney seat in the 2010 general election, narrowly losing to David Cameron by only 33,739 votes.