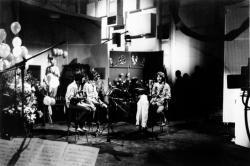 The Our World television programme masterminded by Aubrey Singer, eventually head of BBC Two, was visionary, a thing of technical genius using satellites to link peoples on five continents, and one of the oddest pieces of television output in history. It went out to 31 countries (originally the Eastern Bloc was to have been included, but politics intervened), with contributions from 14 of them, the whole under engineering direction from London.
Necessarily bitty, the programme included Picasso, pictures of trams in night-time Australia, the Vienna Boys Choir, cattle-herding in Canada, discussion of the new satellite technology, and most famously The Beatles singing All You Need is Love  chosen apparently in the light of the worsening conflict in Vietnam and that in the Middle East.
Although everything on the programme was supposed to be live, the musicians had pre-recorded backing material to which they added live instrumentation. An estimated 400 million watched pictures of the band playing in the Abbey Road Studios , where a smaller but decidedly select audience also looked on, including Mick Jagger and Keith Richards , Marianne Faithful who was ubiquitous in the 1960s, the excellent Graham Nash, and old slow-hand himself Eric Clapton .