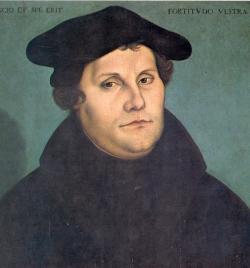 Official end of the Battle of Britain

The Catholic Church in medieval times had long sunk into the corruption lampooned by Chaucer . In the 16th century this was manifest in Borgia Pope Alexander VI; and in the officially sanctioned sale of indulgences, a system for buying forgiveness.
In 1516 the Papacy sent Dominican friar Johann Tetzel to the German states to raise money for reconstructing St Peters Basilica, this to be effected by selling indulgences. Catholic theologian and priest Martin Luther, who taught at the University of Wittenberg, reacted against this, seeing it as falsehood and venality. On October 31 1517 he wrote to the Archbishop of Mainz  according to some accounts nailing his document to the door of All Saints Church in Wittenberg  detailing in what became known as his 95 theses his arguments against the custom of selling indulgences, and a litany of other abuses within the Catholic Church. There is something of the academic in the tone of the theses, but it was self-evidently a challenge to authority  a revolutionary act.
Luthers 95 Theses is widely regarded as the great spark that ignited the Reformation. The Christian church fell to internecine conflict. In Britain Henry VIII published his Defence of the Seven Sacraments and became Defender of the Faith; but soon split with Rome. The reign of Mary I saw a bloody reaction to reform; and Elizabeth I faced the Armada sent to conquer Protestant England. Tensions between Protestants and Catholics are still evident in sectarianism in Northern Ireland and the West of Scotland; and the division is enshrined in our law of succession.
It is interesting to note that one of Luthers points  why the Papacy asked for money from the poor rather than use its own vast wealth  remains valid today, as by extension it is for the Church of England.