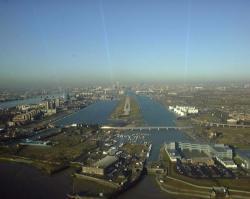 The Battle of London Airport

The Metropolitan Police Flying Squad was formed in October 1918, though the nickname only came about after a Daily Mail journalist (wonderfully he was called Crook) used the phrase in a 1920 article on the officers who had been given two ex-RAF motorised tenders able to rush to crime scenes at a breath-taking 40mph. One of the Sweeneys (Sweeney Todd, Flying Squad) biggest operations, that brought them to national prominence, was when they foiled a huge bullion robbery at London Airport, now called Heathrow , on July 28 1948.
This affair was not one with tyres screeching as police raced in; instead, they had learned of the plan to rob a bullion warehouse at the airport from an informer. The criminals were to drug the guards and steal the bullion, but backed up by colleagues hidden in the warehouse other Flying Squad officers replaced the guards, pretended to have been drugged, then awoke to grab the villains. Rather than coming quietly, however, the gang used iron bars and other weapons to assault their would-be captors, many of whom were injured, several concussed, during what came to be called The Battle of London Airport. But the Sweeney got their men, who went away for an average of 10 years each.