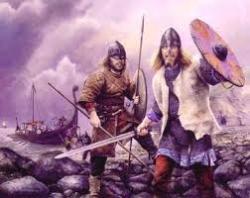 As with so much of pre- Conquest history, details of the Battle of Tettenhall in 910 are sketchy and much debated. Indeed the very name of the battle is disputed, with Wednesfield vying for the honour. What is not doubted is the significance of the victory for the kingdoms of Wessex and Mercia, whose forces combined to defeat the last great Viking raid out of the Northumbrian Danelaw.
Given the nature of the clash, it is probable in fact that the fighting took place at several locations around what is now Wolverhampton, as the Viking raiders who had ravaged swathes of Mercian territory (roughly the modern Midlands) made for the safety of their boats at Bridgnorth , whence they could have returned home laden with their booty. Edward , King of Wessex, was absent in Kent , one of the reasons for the timing of the raid (also in revenge for a Saxon attack on Northumbria the previous year), but warriors from both Mercia and Wessex united to block the Viking route to Bridgnorth. Aethelred of Mercia led the army to victory, killing three Viking kings and many lesser leaders, the total Danish death toll in the thousands. With the Northumbrian Vikings decapitated their threat was effectively ended.