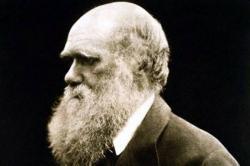 'The very essence of instinct i'... More

Charles Robert Darwin was born 12th February 1809 and died 19th April 1882. He was an English naturalist and geologist responsible for proving the theory of evolution by natural selection. Darwin was born in Shrewsbury, the fifth of six children of wealthy society doctor and financier Robert Darwin and his wife Susannah. He attended the Anglican Shrewsbury School as a boarder before going to Edinburgh University to study medicine. He was revolted by the brutality of surgery at the time and did not enjoy his course. In his second year he grew interested in natural history and his interest in Jean-Baptiste Lamarck's theory of evolution by acquired characteristics began to develop. However, his father was unhappy at his son's progress and enrolled him in a BA course at Christ's College, Cambridge to qualify as a clergyman. Darwin preferred shooting and riding to studying and joined Reverand John Stevens Henslow's natural history course. He passed his finals but was in no rush to take holy orders. He was recommended as a suitable trainee naturalist for the unpaid position of gentleman companion to Robert FitzRoy, the Captain of HMS Beagle, which was to leave to chart the coastline of South America. The Beagle survey took 5 years during which time Darwin established his reputation as a naturalist. His journal, The Voyage of the Beagle, provided social, political and anthropological insights into the wide range of people he met, both native and colonial. When the Beagle returned on 2nd October 1836, Darwin was somewhat of a celebrity in scientific circles and went round presenting his collections and specimens to various experts to describe. Darwin then moved to Cambridge to organise work on his collections and rewrite his Journal, before moving to London the following spring to live and work amongst scientists who believed that God preordained life by natural laws, rather than ad hoc miraculous creations, as most people believed at the time. Various experts were beginning to identify new species based on Darwin's specimens. Darwin started to become convinced that creatures arriving on the Galapagos Islands had become altered in some way to form new species on the different islands, and he began a secret notebook on transmutation. Darwin then took on even more work, agreeing to write books on zoology and South American geology, as well as finishing his journal. He started to suffer ill health and went to stay with relatives on his mother's side of the family to try and recuperate. His cousin, Emma Wedgwood was present, and the following year Darwin decided to propose marriage to her. He also told her about his various theories and even though she accepted his marriage proposal, she pointed out that as a devout Anglican she was worried that some of his ideas might affect their status in the after life. The couple were finally married in January 1839, and moved into a house in Gower Street, London. By now Darwin had his theory of natural selection to work on as his "prime hobby" whilst working on his publications of the scientific results of the Beagle voyage. Darwin and his growing family then decided to move to Down House in Downe, Kent in November 1842 where the Darwins completed their family of 10 children. By July of 1843 Darwin had turned his theory on transmutation into a 230-page essay which he confided to a colleague felt like "confessing to a murder", but was shocked to discover many similar arguments posed in the anonymous publication, 'Vestiges of the Natural History of Creation'. Although amateurish in its presentation, it paved the way for Darwin. Tragedy struck in 1851 when his daughter Annie died after a long series of illnesses which Darwin worried might be hereditary or caused by inter-breeding. It was at this point that his faith in Christianity began to dwindle. He continued with his research, losing 2 other children in infancy. 'On the Origin of Species by Means of Natural Selection' was finally published on 22nd November 1859 and wide public interest followed. In the book, Darwin's only allusion to human evolution was that "light would be thrown on the origin of man", but the book caused huge debate and raised the much parodied theory of 'men from monkeys' into the public conscience. Despite his detractors, Darwin had many supporters and he was awarded the Royal Society's Copley Medal in 1864. 'The Origin of Species' had numerous reprints and translations into many languages, becoming a key fixture of popular culture at that time. Darwin's experiments, research and writing continued, moving towards the more controversial aspects of his theory including humankind's descent from earlier animals. However, it wasn't until 10 years after the publication of 'The Origin of Species' that Darwin published the two-volume 'The Descent of Man and Selection in Relation to Sex' in 1871, and a year later 'The Expression of the Emotions in Man and Animals' with both books having considerable impact and laying the foundation stone for all modern biology. Darwin died in Downe, Kent and at the request of the Royal Society, was given a state funeral and buried in Westminster Abbey.

Contributors: Do you have a site related to Charles Darwin?
Supply some content for this page and we will gladly add a link to your site. Email here.