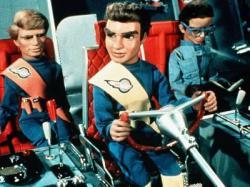 Much mimicked, but much loved too, Thunderbirds like Gerry Andersons other Supermarionation series (Stingray, Captain Scarlet et al) struck a chord with children as however brilliant the pupeteering it still seemed like toys saving the world. When you are eight you have little reason to think they cant.
Filmed somewhat incongruously in Slough , the series featured the American Tracy family of all-action heroes, led by father Jeff, one of the first men on the moon (as the series was set in 2065 not the best prediction ever). Every boy wanted to be Scott or Virgil; and hoped for a Thunderbird 1 Dinky Toy at Christmas.
The very first episode, for the record, was Trapped in the Sky, written by Gerry Anderson and his then wife Sylvia, who also voiced Lady Penelope. In the show the Hood sabotages a new super-aircraft, forcing the International Rescue team to come to its aid so he can steal their secrets. It was only kids in the ATV Midlands region who got to enjoy that first September 30 broadcast; London only joined the jerky-armed party on Christmas Day that year.
Mock the occasionally-visible strings as we do, the production values on the series were very high, various techies later poached to work on Star Wars for example. And each of the early episodes ran to 50 minutes, effectively a mini-movie.
Do we still love them? Y-y-y-yes M-Mr Tracy.