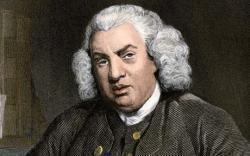 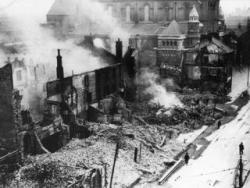 Samuel Johnson was partially sighted, depressive, forever concerned about his finances, and probably suffered from Tourettes Syndrome. The first of those factors may have hindered his studies slightly, though he was considered by Adam Smith to be acquainted with more books than any of his contemporaries; the other three quite possibly helped him in his herculean task of compiling single-handedly his Dictionary of the English Language: he seems to have driven himself in work to keep melancholy at bay; the sooner he finished the dictionary the more time he would have for other works (though plenty appeared during the project); and his obsessive nature is thought to have been linked to his Tourettes.
Having contracted to write the dictionary in June 1746 , Johnson prepared his plan the following year, and with the help of six assistants (for copying quotations and similar tasks) he set about carrying it out. The great man thought it would take him three years, but he actually laboured on it in his much encumbered house at Gough Street until 1755. On April 15 that year it was finally published. A lesser man would have given up long before  Johnsons own feelings summed up by his famous definition of a lexicographer: a writer of dictionaries, a harmless drudge.
While the etymology was far from perfect, and pronunciation guides rough and ready, it was thorough, comprehensive, and even amusing, the writer unable to resist for example defining oats as: a grain which in England is generally given to horses, but in Scotland supports the people. Recognition of the enormity of his achievement began even before publication, Oxford University conferring an honorary degree on Samuel Johnson as the book was about to appear.