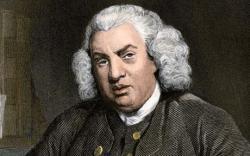 Johnson Contracts to Produce His Dictionary

On June 18 1746 Samuel Johnson contracted with a group of London publishers, printers and booksellers, among them William Strahan, Thomas Longman , and Robert Dodsley, to produce a complete dictionary of the English language. He was to be paid 1500 guineas for his labours, though no royalties. It was not a bad bargain for Johnson: 1500 guineas then would be roughly £250,000 now; and he apparently intended to complete the task on his own in just three years. It took him nine.
Samuel Johnson published his plan for the work in 1747; it broke new ground by including demonstrations of usage in the form of quotations by authors such as Shakespeare and Dryden . He employed clerical assistants at his home, 17 Gough Street, to keep up with his prodigious output, but otherwise every one of the 42,773 entries was his work. He was not averse to the occasional joke within the learned tome either, one famous definition reading: Oats: a grain which in England is generally given to horses, but in Scotland supports the people.
The completed dictionary was published on April 15 1755. Codification was apparently fashionable at this period  the first instalment of the Encyclopaedia Britannica appeared in 1768.
Comparisons are invidious, but work on the Oxford English Dictionary which eventually supplanted Johnsons began in 1857, and the A  Ant section was only published on February 1 1884  the complete work only appeared in 1928.