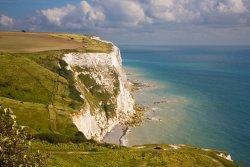 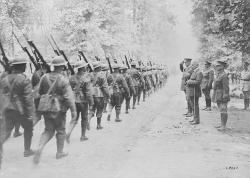 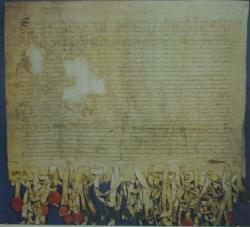 The Declaration of Arbroath

As with tsunamis, we tend to think of earthquakes happening elsewhere; and in both cases we are of course wrong (the most famous tsunami here hitting the Severn Estuary in 1606 ). On April 6 1580 this country suffered both events, a major earthquake in the Dover Straits  estimated at anything between 5.5 and 6.2 in magnitude  causing a tsunami, though the devastation from both was greater in France than in England. Indeed only two deaths seem to have been recorded onshore, children in London crushed by masonry falling from Christs Church Hospital, though ships in the Channel were overturned with fatal results.
Damage was worst along the Channel Coast  a landslip in Dover brought down a section of the White Cliffs and a piece of Dover Castle ; buildings in Hythe and Sandwich were hit, among them substantial structures including churches and a castle. Westminster Abbey and Ely Cathedral both had masonry dislodged by the force of the quake.
In general repair work quickly cleared away signs of the event, but lasting memorials can be found in literature  Edmund Spenser engaged in correspondence with a friend on the matter, and Shakespeare in Romeo and Juliet gives the nurse the line: Tis since the earthquake now 11 years.
The bad news is that other sizeable quakes struck the same area in 1382 and 1776, i.e. they hit roughly every 200 years, which some think means we are overdue one to continue the sequence.