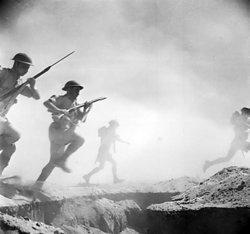 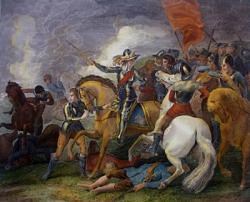 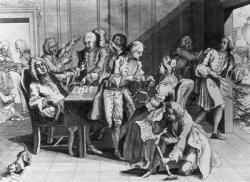 The significance of the Allied victory in the Battle of El Alamein which began on October 23 1942 is hard to over-estimate. It marked the turning of the tide in WWII : as Churchill famously stated Before Alamein we never had a victory. After it we never had a defeat.
By the first half of 1942 Axis forces had driven into Egypt, threatening the Suez Canal and thus the oil resources of the Middle East on which the Allies relied. Rommel had proved an exceptionally capable General, manoeuvring his forces with skill and daring to great effect, but this may have in the end counted against him, as Hitler and Mussolini failed to provide the supplies and reinforcements he needed. By July 1942 the situation around El Alamein was a defensive stalemate, General Auchinleck having dug in.
In August 1942 Montgomery  not the first choice of the Allied leadership, but General Gott was killed in transit - replaced Auchinleck. He prepared meticulously for an offensive, showing great imagination and tactical brilliance, hiding the points of attack from Rommel, and even correctly predicting the length of the battle at 12 days.
Montgomery did have major advantages over Rommel, however: with some 200,000 troops he had almost double the Axis strength; likewise in tank numbers Monty had around 1100 to the German 550  and with Sherman tanks provided by America the technical superiority previously enjoyed by the Panzer divisions no longer held. A further decisive factor was superior Allied air power, including recently arrived Spitfires. The Germans were short of fuel, thus the mobility of their armour was restricted, and their forces were on half-rations.
The battle still had to be won; and with the Germans having dug in for months and planted about half a million mines the fighting was hard and heroic. Some units were devastated as they strived to achieve their objectives.
By November 5 the battle was over, though the Allied forces were physically exhausted and the immediate follow-up to make the victory total was not possible. Rommel was able to salvage a small part of his army, and retreat 1,500 miles to Tunisia. But effectively the North African front had been won by the Allies.